In response to Turkey’s constitutional referendum on April 16, 2017, which replaces the parliamentary system with an executive presidency,  PoLAR and APLA commissioned a series of responses from scholars and activists working on democracy and human rights in the region. In this installment, Serra Hakyemez and Bilge Firat reflect on the ramifications of the referendum.

“In democratic states, no single man can shape social life according to his thinking. The new era of restoration will help our society to make peace with itself, to stand on its own intellectual formation, cultural values, and history, not on those of this or that leader.”

The recorder captured these words after a historic vote in Turkey. Contrary to the reader’s expectation, perhaps, the vote in question was not last week’s referendum where the peoples of Turkey voted on a set of constitutional amendments to hand President Erdoğan powers unprecedented in Turkey’s relatively short history of parliamentary democracy. No, this was back in 2007, after the July general elections that gave him full confidence to take the country on a new path that would eventually end in his version of “presidential democracy”.

My interlocutor at the time was not a member of the opposition, but a former MP and founding-member of Erdoğan’s Justice and Development Party (AKP). He was not lamenting Erdoğan’s decade-long attempts to shape society to his thinking, but was lambasting the founding figure of modern Turkey as we know it.

As I turned off the recorder, he asked me to write it down: “We will destroy the legacy of Atatürk.” A decade later and at the apogee of his power, Erdoğan may be facing the destruction of his own legacy.

Despite being gifted by a prominent Turkish EU lobbyist with the sobriquet “conservative democrat,” much favored by the Western liberals at the time, Erdoğan has never been a true democrat. Seemingly following liberal democratic principles by protecting minority rights, he was capable of clamping down on those rights whenever it suited him on the grounds of majority rule. Thus, his intentional failure to consolidate government and his subsequent war on the Kurds after their surge in votes in the June 2015 election were to be expected.

Whenever different factions oppose his antidemocratic behavior, Erdoğan comes down heavy on dissent with his police state. Signing a peace petition such as the one initiated by Academic for Peace becomes a “terrorist” act. Hundreds are imprisoned or fired from their jobs.

His approach towards democracy, which he understood as majoritarianism backed by crude electoral politics, was rather instrumental. For the last couple of years, he ruled Turkey as if regime change had already taken place. However widely contested by the “No” voters and refuseniks inside the country, and by international bodies like the Organization for Security and Co-operation in Europe, the April 2017 referendum turned his de facto presidential rule into de jure law of the land.

With this slimmest of victories, and even with that majority put into question by odd rulings of the Erdoğan-stacked electoral commission, the Turkish President completely revamped the hitherto existing political infrastructure of Turkey that was embodied in parliamentary governance and some separation of powers. Following last year’s coup attempt, apparently orchestrated by a clandestine network led by a once-Erdoğan acolyte, Fethullah Gulen, the President-in-office moved to consolidate his powers by changing the Turkish regime from a parliamentary democracy to a presidential system alla Turca, inspired by the US presidential system without the checks and balances. He fired judges, civil servants, even teachers who came under his suspicion. He jailed more journalists.

During his two decades of public service under a populist agenda, the “government” gradually replaced the “state”, to the point that the presidency became a synecdoche for the government. Today, Turkey is a sharply divided society run by a President and his party-state. His party is the new Gemeinschaft (in Turkish, cemaat), providing a sense of belonging and identity to many from all classes of society, but especially the unemployed, underpaid, or underschooled.

Many have equated Erdoğan’s vision with neo-Ottomanism, a revival of the Ottoman imperial legacy. In the words of my AKP interlocutor from a decade ago: “We cannot refuse our imperial past. Turkey is not a new state; this year is our 936th anniversary in these lands [referring to 1071, the Turkish occupation of Anatolia]!! From the Seljuks to the Ottomans, the State has endured without interruption…But we still haven’t gotten over the fact that for the last 200 years, Turks have continuously lost [land]. To constantly lose and lose so big led us to this complicated psyche that we need to overcome.”

AKP politicians’ neo-Ottomanism, then, is in many ways a conservative response towards healing their bruised ego, which they interpret as a damage to the nation.

There is another aspect of Erdoğan’s neo-Ottomanism worth mentioning, a bent that he uses to justify his alla Turca presidential ambitions, which turned out to be more in line with Russian presidentialism than the US system presidential system. Sure, the Turkish state has never been fully democratic, but for Erdoğan, it is more important now to achieve success by becoming a full-fledged post-developmental technocracy. Unlike common understandings of the term, Erdogan’s technocratic vision gives no independence to experts and their rule per se. Instead, it is more about curbing the powers of the bureaucratic classes from whom he once benefitted and replacing them with enhanced patronage relations. Embodied in numerous material infrastructural projects in the areas of energy production and transport, Erdogan’s technocratic predilections, his desperate need to “cut the red-tape” —along with his stacking the judiciary and police with “his people”— earned him the label of the new autocract.

In the midst of widespread allegations of vote rigging and election-fixing by the Higher Election Board, many people in Turkey believe that, after the April referendum of last week, one of the last remaining pillars of democracy since the declaration of constitutional monarchy in 1876 and first general elections during the Ottoman Empire is today untrustworthy. Over fifteen years in office, the AKP has built and maintained its political legitimacy through elections. Yet the party has never received more than 49.5% of the votes.

Erdoğan desperately characterizes the April referendum results as a decisive win, but are they really more of a defeat and cause for him to fear losing his mandate? When electoral politics fails to provide legitimacy to AKP power in the eyes of the masses, one wonders: what remains for its naked rulers? By forcing a divisive constitutional change, the rulers of modern Turkey have equally destroyed the political legacy of the Ottoman Empire, which they so cherished. Last week’s constitutional referendum might well be the last vote for some time by which the peoples of Turkey express their will, however constrained. But since the Gezi protest large parts of the population express their will outside of the ballot box, politics in Turkey is far from over. 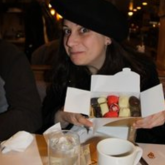 Bilge Firat is Assistant Professor of International Studies at Texas A&M University. Trained as a political anthropologist, her expertise is in lobbying and international negotiation strategies between the European Union and Turkey. Most recently, she studies energy transport infrastructures in Eurasia. Read her recent PoLAR piece: “Political Documents and Bureaucratic Entrepreneurs: Lobbying the European Parliament during Turkey’s EU Integration.” Website: http://scholars.library.tamu.edu/vivo/display/n45862549