The “Anatolian Revolution” and the “Spirit of Capitalism”

In response to Turkey’s constitutional referendum on April 16, 2017, which replaces the parliamentary system with an executive presidency,  PoLAR and APLA commissioned a series of responses from scholars and activists working on democracy and human rights in the region. In this installment, Elektra Kostopoulou, Ayşe Parla, Aimilia Voulvouli and Jennifer Curtis reflect on the ramifications of the referendum. 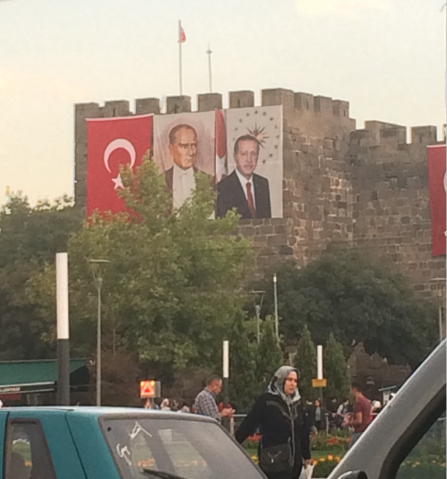 It was during a visit to a private hospital in Kayseri, a central Anatolian city in Turkey, hometown of Abdullah Gül (former President of the Republic and founding member of the ruling Justice and Development Party, Adalet ve Kalkınma Partisi, or AKP) — a city considered to represent the so-called New Turkey (Yeni Türkiye) — that I saw a headscarved woman wearing a short-sleeved t-shirt. To me, that was very unusual. As an outsider, it was my understanding that pious Muslim women were not supposed to show their skin . During my years in Istanbul working for a conservative university, I had witnessed my colleagues and students coming to class wearing their trenchcoats (pardesü) even during summer, in 30-35 degrees celsius. Yet even one of these colleagues confessed to me, when I told her that I was moving to Kayseri: “I could never live in a such a conservative place.”

To be honest, at that point I began to think that perhaps my decision to relocate to İç Anadolu (Inner Anatolia) was not a very smart move. I remember wondering: if a conservative woman found Kayseri very “old-school,” so to speak, how was I supposed to live there? Of course, my anthropologically adventurous self prevailed, and immediately reminded me that this would be a fantastic opportunity to conduct fieldwork in the heart of Yeni Türkiye and immerse myself in trying to make sense of the growing support for the government in these regions, which pro-government media referred to as “the Anatolian Revolution” (Anadolu İhtilali).

This was a phrase emblazoned on the TV news headlines on referendum night on ATV, a well known pro-government channel, in total harmony with government narratives about the recent developments in Turkish politics especially after the attempted coup of July 2016. “The Anatolian Revolution” is an expression sometimes used to describe the Turkish War of Independence (1919-1923). However, the increasingly widespread use of the term by pro-government groups in contemporary Turkey is twofold: First, it narratively frames the government and its supporters’ backlash against the attempted Coup as a kind of second War of Independence. “The triumph of July 15 can be compared to the victory of Çanakkale[1]” said one the speakers at the Democracy and Martyr’s Meeting (Demokrasi ve Şehitleri Mitingi) that took place in Kayseri (one of many organized throughout the country) to celebrate the “will of the people” to resist the coup attempt. Second, the phrase refers to the geographical areas that supported the “Yes” vote, which are traditionally the electoral strongholds of AKP. These are the districts of the Anatolian region of Turkey (Kayseri among them) that voted “Yes” in the April referendum loud-and-clear.

The Kayseri Democracy and Martyr’s Meeting (Demokrasi ve Şehitleri Mitingi), October 2016. On the central banner is the phrase, “Revival of the Night of the Resistance of 15th of July.” It indicates a celebration reviving the resistance against the coup on the night of 15th of July. Photo by Aimilia Voulvouli.

Foreign Media attempted to decipher the referendum vote during the days that followed the closing of the ballot. Most news outlets argued that “No” prevailed in the most affluent western part of the country, and in the predominantly Kurdish populated areas of the southeast, owing to the hostile climate that government policies in the Kurdish areas have caused; whereas the poorer Anatolian regions favored “Yes.” I followed the news from across the Turkish border in Lesbos in my home country, Greece. The narrative presented by the Greek Media followed similar trends, suggesting that poor, uneducated, non-westernized Turks prefer to be ruled by an authoritarian “Sultan,” whereas wealthy, educated and westernized citizens are attracted by a European-style liberal democracy.

If that’s the case, then why did cities like Kayseri, with three universities[2] and a large student population, which is affluent and considered to be one of the so-called “Anatolian Tigers,” back “Yes?”

“Anatolian Tigers”’ (Anadolu Kaplanarı) is a term used to describe a number of Anatolian cities of Turkey that have displayed impressive growth rates, as a result of the economic activity of conservative entrepreneurs that backed the electoral success of the predecessor of AKP, the Islamist-oriented Welfare Party (Refah Partisi – RP) in the 1990s (Öniş 2001). They are considered to be the product of the 1980s neoliberal restructuring of the Turkish economy, which at the same time created a constituency nurtured by an ideological framework characterized by a “Turkish-Islamic synthesis.” This “mixture of nationalism and Islam” (Öniş 1997: 750) shaped the character of the “Anatolian bourgeoisie,” an odd group of what I, in my work, frame as “Islamic protestants” (Voulvouli 2017 forthcoming) that operates within a framework of “disenchanted” Islamic values. Over the years, those city’s elites were able to shop in lavish shopping malls with designated praying areas, drive big cars in designer pardesüs, have extravagant weddings with esteemed guests from the Islamist political elites. These characteristics are neither particularly poor nor overtly “traditional,” and they generate a proliferating image of the New Turkey. One, clearly secularist interlocutor, born and raised in Kayseri, told me that even if he decided to move he wouldn’t know where to go, since more and more Turkish cities are becoming like Kayseri—which disappointed him enormously.

My ethnographic work suggests that it is this proliferating ideological framework that backed AKP’s rise to power and continues to sustain it fifteen years later – support which undergirds the rise of this increasingly authoritarian government. The political divide in Turkey is not the spirit of “tradition” versus “modernisation.” Rather, it is the use of Islam more as an idiom and as an influence for people to engage in financial actitivity. It is – drawing on Max Weber (1930) – the Islamic ethic and the “spirit of capitalism”. After all, as the 8th President of Turkey Turgut Özal once said, “rich Muslims are better than poor Muslims” (Bali 2002). Or – to return to my introductory account – as a friend of my mine commented when I told her about the short-sleeved woman wearing Hijab: “as long as her head is covered she, her husband and her family can make a good living.” Her heart (or arm) doesn’t have to be in it.

Aimilia Voulvouli is an ERC Postdoctoral Fellow at Aristotle University of Thessaloniki in Greece and case worker at the Greek Asylum Service. Prior to that, she spent four years in Turkey as an Assistant Professor in Istanbul and Kayseri. She has taught at the University of the Aegean in Greece, where she also served as a Postdoctoral Fellow funded by the Greek State Scholarship Foundation. She has conducted extensive fieldwork in Turkey and Greece on collective action. Her research interests include political anthropology, social movements, environmentalism, crime, and the bureaucracy involved in asylum procedures.

Acknowledgments: Many thanks to Panos, Nazlı, Hüseyin and Kıvanç for being patient enough to talk Turkish history and politics with me.

[1] The Battle of Çanakkale is considered to be the basis that formed the Turkish War of Independence.

[2] Four until recently as one university was shut down after July 15 due to its alleged connection with the Fetullah Terrorist Organisation (Fethullahçı Terör Örgütü – FETÖ) that refers to supporters of Fetullah Gülen, the self-exiled, US based cleric who has been targeted as the mastermind of the coup attempt by the government.

Voulvouli, A. (Forthcoming) From Tarlabaşı to Gezi and beyond: The 2013 event in the conjuncture of Neoliberal times. Urbanities: Journal of Urban Ethnography.